Though not a solicitation being sent to you, this web site may be considered an ADVERTISEMENT. Before making your choice of attorney, you should give this matter careful thought. The selection of an attorney is an important decision. If you believe this web site is inaccurate or misleading, you may report same to the Committee on Attorney Advertising, Hughes Justice Complex, CN 970, Trenton, NJ 08625-0970. 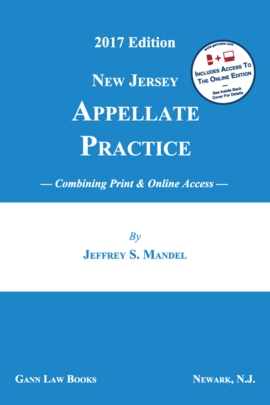 When filing a New Jersey appeal, you need to know if you are filing an appeal as-of-right, an interlocutory appeal, or an emergent appeal. Lawyers and litigants oftentimes confuse the three types of New Jersey appeals.

A New Jersey appeal as-of-right is an appeal filed in the Appellate Division from a final decision or order from one of the trial divisions or an administrative agency. While there are exceptions, the New Jersey Rules of Court permit and appeal as-of-right (an automatic appeal if timely and properly filed) when there has been a decision that concludes all issues as to all parties. New Jersey lawyer Jeff Mandel handles appeals as-of-right for the Law Offices of Jeffrey S Mandel LLC.

New Jersey Court Rule 2:2-4 states, "Except as otherwise provided by R. 3:28, the Appellate Division may grant leave to appeal, in the interest of justice, from an interlocutory order of a court or of a judge sitting as a statutory agent, or from an interlocutory decision or action of a state administrative agency or officer, if the final judgment, decision or action thereof is appealable as of right pursuant to R.2:2-3(a), but no such appeal shall be allowed in cases referred to in R. 2:2-2(a).

New Jersey Appellate Court Rule 2:5-6 provides, "Applications for leave to appeal from interlocutory orders of courts or of judges sitting as statutory agents and from interlocutory decisions or actions of state administrative agencies or officers shall be made by serving and filing with the court or agency from which the appeal is taken and with the appellate court a notice of motion for leave to appeal, as prescribed by R. 2:8-1, within 20 days after the date of service of such order, administrative decision or notice of such administrative action. If, however, a motion to the trial court for reconsideration of the order from which leave to appeal is sought is filed and served within 20 days after the date of its service, the time to file and serve the motion for leave to appeal in the Appellate Division shall be extended for a period of 20 days following the date of service of an order deciding the motion for reconsideration. The filing of a motion for leave to appeal shall not stay the proceedings in the trial court or agency except on motion made to the court or agency which entered the order or if denied by it, to the appellate court." Jeff Mandel also handles interlocutory appeals, but you need to contact him quickly (lawyer@njappeal.com) because the time limits are short.